Huntington’s disease is a debilitating, progressive disease that is eventually fatal. Affecting nerves of the brain, Huntington’s disease (HD) deteriorates an individual’s mental and physical capabilities over time. A recent study published in The Journal of Experimental Medicine by Stanford University researchers identified potential biomarkers to assess disease progression and analyze treatment effectiveness.

Huntington’s disease is genetic in nature 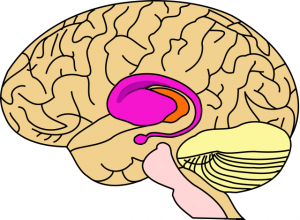 The striatum, shown in purple, is the area of the brain most damaged in early Huntington’s disease.

People affected with HD have an expansion of a trinucleotide (cysteine-adenine-guanine) repeat in the Huntington gene. This repeated sequence results in production of a huntingtin protein that damages cells via an aggregation mechanism. HD is inherited as an autosomal dominant mutation; thus, every child of a parent with the disease has a 50% probability of inheriting the gene. The mutant gene is passed down to offspring independent of gender – males and females inherit the gene equally. One of the most devastating characteristics of HD is that onset is in a person’s prime years, between 30-50 years of age. Many have already had children before they show signs of the disease and thus have passed the mutation down to their children.

Because of its means of inheritance, HD may affect multiple generations within a family. Furthermore, as each offspring has a 50% probability of inheriting the gene, family members live with the stress and knowledge that they may succumb to HD in their prime. According to the Huntington Disease Society of America, in the United States alone, there are 200,000 at risk for HD and 30,000 who are symptomatic.

Early indication of HD is very subtle, such as changes in personality, mood or mental faculties. A characteristic of the disease that follows is poor coordination and a jerky walking gait. Early symptoms may be confused with Parkinson’s disease. As these physical effects worsen (excessive involuntary movements called Huntington’s Chorea), mentally the individual shows increasing signs of dementia.

As the patient declines, many die from complications of the disease such as heart or organ failure, choking, pneumonia or infection, rather than HD itself. Although there are treatments that show minimal benefit, there is no cure for HD. Human clinical trials are lengthy because of the slow progression and inability of clinicians to biopsy affected parts of the brain. Diagnosis is by genetic test, which may be performed at any time.

Dr. Daria Mochly-Rosen and a team of researchers at Stanford University School of Medicine had previously identified P110, a molecule that can restore the function of mitochondria, which in mouse models of HD are disrupted due to aggregation of huntingtin protein. Treatment of disease model mice with P110 increased plasma mitochondrial DNA levels to that of normal, healthy mice.

In this study, Dr. Mochly-Rosen looked for other biomarkers that were increased in the HD model mice that could be normalized by P110 treatment. They identified 8-hydroxy-deoxy-guanosine (a bi-product of oxidative DNA damage) in urine and huntingtin protein aggregates in muscle and skin cells, much easier to obtain and analyze than brain tissue. Additionally, the investigators found that some of their biomarkers are also present in a small human HD study, indicting they may be promising biomarkers for study. Dr. Mochly-Rosen hopes that their work “will provide the basis for a larger study of patient samples that may ultimately identify biomarkers that can be used as surrogate markers to determine the benefit of therapeutic interventions in diagnosed but asymptomatic HD patients to prevent or delay disease onset.”