Intro to Plasmids and Vectors

Plasmids are small circular double-stranded DNA molecules that can self-replicate independently from a cell’s chromosomal DNA. They occur naturally in bacteria, archaea and eukaryotes, but it is in bacteria that plasmids play the most significant role. Bacterial plasmids carry genes that provide useful genetic advantages that help hosts survive environmental stress. For example, bacterial plasmids may encode genes for enzymes that digest antibiotics such as penicillin or ampicillin. When bacteria die, their plasmids are released and can be taken up by other bacteria.

Plasmids are easily isolated and manipulated, and scientists have long leveraged these naturally occurring elements as important research tools. Plasmids are the basis for recombinant DNA technology, and they are used to clone, transfer, express and otherwise manipulate genes. The term “vector” is used to refer to a natural plasmid that has been engineered to make a more useful research tool. A vector has typically been manipulated to allow for the easy cloning of foreign DNA and expression of foreign proteins. 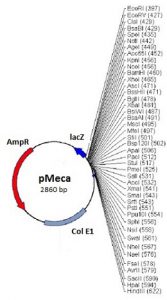 When used in molecular biology, a plasmid must contain three basic elements:

Scientists introduce plasmids into bacteria via a process called transformation. Once successfully introduced and selected for, plasmids are used for a variety of purposes, including:

To conclude, plasmids and vectors are an important tool for molecular biology researchers, enabling gene cloning, transfer, expression and more. Review our full list of available plasmids here and contact us at community@kerafast.com if your lab has any materials to add.