When a mosquito bites a mammal during the blood feeding process, saliva from the mosquito is injected into the host. The saliva may be infected with a virus, in which case the host also acquires the virus. It has been known that of the nearly one hundred proteins in mosquito saliva, some of them act by decreasing the host’s immune system response and thus facilitating infection. Researchers at Central Michigan University College of Medicine recently found that one particular protein, termed D7, does the opposite and actually inhibits transmission of virus. 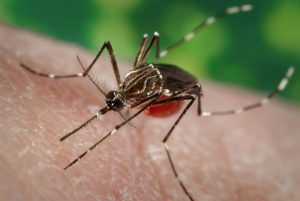 Dengue fever, a tropical disease with flu-like symptoms, high fever and rash, is transmitted via the Aedes aegypti mosquito. According to the World Health Organization (WHO), an average of 390 million people are infected with dengue virus annually. Although many have zero or very mild symptoms, between 10,000 and 20,000 people die each year from the disease. Asian and Latin American countries are most affected with dengue, where it is a leading cause of serious illness and death, especially in children.

Dr. Michael Conway and his colleagues are investigating ways to decrease the efficiency of dengue transmission. In a recent PLOS Neglected Tropical Diseases paper, the team presented their findings on the D7 protein. Initially the researchers isolated proteins from A. aegypti salivary glands. They then focused on proteins present that inhibit dengue virus. D7, a protein that plays a role in the blood feeding process, was present at high levels in the batches of A. aegypti saliva that had strong inhibitory function.

Next, the investigators exposed mice to dengue virus alone or in combination with D7 protein. They found that when D7 was present, the levels of dengue virus RNA were diminished. They also found that D7 binds to dengue’s envelope protein which covers the virus’ surface.

Although use of antibodies to D7 may reduce the efficiency of the mosquito’s blood feeding, these antibodies would then enhance dengue transmission efficiency, thus representing a complex pathogen-vector-host relationship. The authors plan to continue their work and hope it “will lead to the development of better models of pathogenesis, strategies to limit disease transmission, and promote the development of therapeutics and transmission-blocking vaccines.”

Dengue virus is an RNA flavivirus, very similar to Zika virus. Other flaviviruses include yellow fever and West Nile virus. There is no treatment for dengue, but a few countries have now approved a vaccine for use. Many laboratories that study dengue are now focusing on Zika as well due to their similarities and the severity of the Zika epidemic. Interested in a flavivirus antibody? Check out our anti-Zika and anti-flavivirus reagent.