A research team led by Peter Scheiffele at the University of Basel revealed a new association between a genetic mutation and autism, a disorder that affects approximately 1 in 54 children in the United States. The team’s research, recently published in Nature, discovered a link between the neuroligin-3 (Nlgn3) gene and the oxytocin signaling pathway in ASD mouse models. These findings could lead to a potential treatment option for normalizing the social behavior associated with autism.

The results were particularly exciting as the study used Kerafast’s Anti-Puromycin [3RH11] Antibody. This monoclonal antibody provides a non-radioactive method to measure rates of global protein synthesis (mRNA translation) in cells or tissue slices incubated with puromycin, or animals treated with puromycin in vivo. The antibody is from the laboratory of Scot R. Kimball, PhD of Penn State College of Medicine and available online to purchase.

Mutations in the Nlgn3 Gene

Autism is characterized by communication challenges, behavior complications and other social difficulties. Previous research has identified genetic factors associated with autism, but scientists are still unsure how they cause autism symptoms. To research these questions, scientists create mouse models with various gene mutations to display typical autistic behavior found in humans.

In such a mouse model, the team has demonstrated the association between a mutation in the neurologion-3 gene and its disruption to the oxytocin signaling pathway in the brain’s reward system. The hormone oxytocin regulates social behavior in mammals and disruptions to it were shown to reduce social interactions in mice. The loss of neuroligin affects the balance of protein synthesis in such neurons and creates this abnormal response to oxytocin. 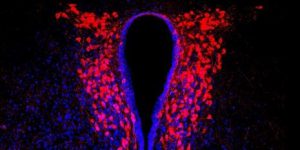 Dr. Scheiffele’s team demonstrated that alterations in oxytocin can be restored with a pharmacological inhibitor of protein synthesis. This treatment method normalized the social behavior in the mouse model as well as a second rodent model of autism.

There have been previous inclinations that oxytocin could possibly play a role in autism. Dr. Scheiffele states, “However, we were very surprised to discover that mutations in neuroligin-3 impair oxytocin signaling pathways. We have succeeded in putting together two puzzle pieces of the mechanisms underlying autism.”

Overall, the study may lead to new approaches for treatment methods related to the social behaviors induced by autism.

Do you also work in this area of research? The puromycin antibody used to measure mRNA translation in the study is available here, and we also offer a variety of reagents that can be used for neuroscience research.