Much Ado About Vitamin D 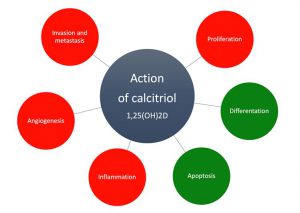 Like in the title of Shakespeare’s play, vitamin D is “nothing” compared to modern complex drugs; it is cheap, widely available, and even produced by ourselves. And again, like the heroes of the play, we get lost in rumors and misunderstandings of the influence of vitamin D in carcinogenesis.

The role of vitamin D in the regulation of calcium-phosphate metabolism is not a new discovery. In the 1980s, the first articles on extraskeletal actions of calcitriol (an active form of vitamin D) were published. It promotes apoptosis and cell differentiation with simultaneous inhibition of proliferation, angiogenesis, inflammation, invasion as well as metastasis.  [1,2].

However, randomized controlled trials (RCTs)  have shown a lack of proof that vitamin D lowers the risk of cancer development [2]. Some of the latest studies using vitamin D in RCTs have caused some doubts.

The first one is time period. Two sample RCTs with invasive cancer of any type as primary end points: the median follow-up of patients was 5.3 years for Mason et al. [3], and it was 3.3 years for Scragg[4]. Whereas, for example, while Meza indicated that for colorectal cancer, (calcitriol affects crucial pathways that drives the tumor [2]) 50 years could pass between the premalignant mutation and the detection [5]. Maybe those who were diagnosed with cancer were already in advanced stages and showed degradation “at molecular level” in the beginning of the RCTs. Vitamin D did not work or was too weak as a “therapeutic agent”.

As far as I know, we also lack knowledge of how vitamin D acts on any stage of carcinogenesis. Is the action the most potent at the first step of initiation or does it still affect cell cycle to great extent during promotion as well as the progression period?

Akiba et al. followed up the patients with non-small cell lung cancer for 3.3 years (median) after the operation and one year of vitamin D or placebo administration [6]. They demonstrated vitamin D supplementation improved survival rate for those with early stage adenocarcinoma with low 25(OH)D [6]. But this study group was less numerous than the groups from two previously mentioned RCTs. Moreover, Barry et al. found out that benefits of supplementation varies between groups with different genotypes in vitamin D receptor (VDR) for adenoma patients [7]. Last but not least, the collected data indicated that cancer cells could have a different expression of vitamin D pathway enzymes [2]. The expression of CYP24A1 (deactivating) was reported to be upregulated in some cancerous cells, whereas the level CYP27B1 (activating) is higher, lower, or remains at the same level. [2].

It is also worth mentioning about immunoediting and the potential role of vitamin D. The vast majority of immune cells possess VDR and therefore could be the potential targets [8]. One characteristic of vitamin D is reduced production of TNF-α [8], which can limit TNF-mediated apoptosis and necrotic cell death. In addition, it can potentially stop the inflammation process [9].Vitamin D also promotes secretion of IL-10 [8], and IL-10 was described as a cell B mechanism favoring cancer cell development [10].

This blog is not intended to question the results of the above-mentioned authors. I would reflect on what could be the reasons for the discrepancy between the theory and the practice, what might cause so much ado.

This blog post was submitted by Maria Latacz as part of our Summer 2020 blog contest. You can vote for your favorite on our Twitter, Facebook and LinkedIn. The winner will be announced on September 14, 2020.