Novel Blood Test to Aid in Diagnosis of Alzheimer’s Disease

Close to six million Americans age 65 and over are currently living with Alzheimer’s disease. That number is projected to more than double by the year 2050.  A debilitating affliction that leads to cognitive degradation over time, Alzheimer’s currently has no cure. An exciting new development has emerged regarding the diagnosis of individuals with the disease. An international study published at the end of July 2020 by the Journal of the American Medical Association (JAMA) details a new blood test that shows great promise in differentiating between people with and without Alzheimer’s disease and has the demonstrated ability to detect the disease up to 20 years before the onset of dementia symptoms in those with known genetic risk for the disease. This is a groundbreaking development that would offer an affordable and accessible option to aid in the diagnosis of Alzheimer’s in living people and could be available for clinical use in as soon as two to three years.

How is Alzheimer’s Disease Currently Diagnosed?

The defining physical feature of Alzheimer’s disease is the clumping of amyloid and tau proteins into plaques and tangles, respectively, in the brain. In particular, the accumulation of tau tangles is closely associated with cognitive decline. Both plaques and tangles have been found in the brains of individuals with confirmed cases of Alzheimer’s disease.

Currently, brain changes caused by the clump formation can only be reliably classified through performing positron-emission tomography (PET) scans or measuring levels of amyloid and tau proteins in spinal fluid via a cerebrospinal fluid (CSF) test. However, these tests are expensive, invasive, and often not readily available.  As a result, Alzheimer’s is often only officially diagnosed via postmortem brain autopsies. These circumstances laid the groundwork for the need for a simple, affordable, accessible, and non-invasive diagnostic test for Alzheimer’s disease.

How Does the New Blood Test Work? 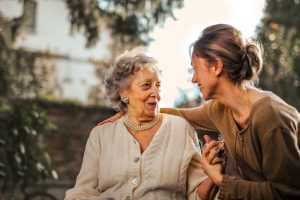 Photo by Andrea Piacquadio from Pexels

The new blood test measures levels of phospho-tau217 (p-tau217), one of the forms of the tau protein found in the tangles, with high accuracy. According to the new study findings, levels of p-tau217 appear to be closely correlated to the buildup of amyloid plaques as well. The precision of the blood test for p-tau217 is very closely aligned with the levels of precision offered by the more expensive PET scans and CSF diagnostic tests currently available.

The study performed on 1,402 participants from cohorts in Colombia, Sweden, and the United States found that the blood test for p-tau217 could discriminate Alzheimer’s from other forms of dementia with a 96 percent accuracy level. Researchers found that detection of blood p-tau217 was more accurate at identifying cases of Alzheimer’s disease than blood tests for p-tau181 (a more well-known form of the tau protein) and magnetic resonance imaging (MRI) and had comparable accuracy to PET scans and CSF tests.

The study also found that blood p-tau217 levels were seven-times as high in individuals with Alzheimer’s compared to those without any form of dementia or other neurodegenerative disorders and that these elevated levels were able to be detected up to 20 years prior to the onset of symptoms of cognitive impairment in individuals with genetic predisposition to the disease.

This new blood test would help researchers more quickly identify appropriate candidates for clinical drug trials and monitor the impact of selected therapies. The potential for early detection would allow for early intervention before significant cognitive damage is incurred. It would also open the doors for researchers to better understand the interpretation and progression of Alzheimer’s in larger and more diverse populations. While these early findings are promising, the results will need to be replicated in clinical trials encompassing larger, more diverse populations and standardized to allow for consistent analysis by labs before the blood test is made available for widespread clinical use.

This blog post was submitted by Suma Gangasani as part of our Summer 2020 blog contest. You can vote for your favorite on our Twitter, Facebook and LinkedIn. The winner will be announced on September 14, 2020.