Scientists at The Pirbright Institute, working closely with Inovio Pharmaceuticals, have proven that pigs can be used to determine whether influenza antibody therapies are effective. The team’s new research, recently published in the Journal of Immunology, found that a human antibody (2-12C) can neutralize the H1N1 2009 flu pandemic virus in pigs, which provides protection against the influenza. Pigs that received treatment had reduced amounts of the virus and less signs of infection in the lungs.

We were particularly excited to see this study as the anti-influenza antibody was manufactured by our sister company Absolute Antibody. The antibody clone 2-12C is available online in various recombinant engineered formats, including human IgG1, human IgM and mouse IgG2a.

The use of antibodies to convey protection and reduce influenza symptoms is gaining momentum throughout the industry. In the past, such efforts have been utilized for the Ebola virus and respiratory syncytial virus. As for influenza, many influenza antibodies have moved to clinica 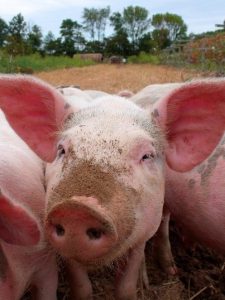 l trials based on their success in smaller animals but have yet to show any therapeutic effect in humans.

In a previous study, Pirbright researchers had shown that pigs are good models for influenza vaccine studies as they happen to be naturally infected by the same subtypes of influenza viruses as humans. Pigs also have similar immune systems and are more comparable in size and composition to humans than smaller animals are.

The new study demonstrated that pigs provide a useful animal model for monoclonal antibodies, allowing for more accurate assessments of antibody therapies prior to human clinical trials. Thus, the success generated in the pig model highlights that antibody treatments for influenza could potentially work in humans.

The study revealed that the 2-12C antibody successfully treated influenza in pigs. In addition, the scientists also assessed a new antibody delivery method that administered 2-12C antibody genes to pigs. Once inside the pig cells, the genes continue to create new antibodies, therefore providing longer-term protection than a single dose of antibodies. The team showed that this delivery method for 2-12C provides protection from the disease symptoms typically caused by H1N1.

These results suggest that 2-12C antibody treatment could potentially work in humans, as pigs are physiologically similar to humans and offer a better model system than smaller animals.

Head of the Mucosal Immunology Group at Pirbright, Dr. Elma Tchilian, says: “ We are very excited that the pig model is becoming useful for testing and refining antibody treatments for life threatening influenza infections and could be equally useful for other infectious diseases.”

The antibody clone 2-12C is available online via our sister company Absolute Antibody, which specializes in recombinant antibody technology. The antibody was isolated from a patient donor, sequenced, and engineered into various formats, including human IgG1, human IgM and mouse IgG2a. The antibodies are now recombinantly produced to provide batch-to-batch reproducibility, high purity, low endotoxin levels.

If you work in this area of research, you may also be interested in Kerafast’s full collection of influenza antibodies, developed in academic laboratories and made available to researchers worldwide via our reagents catalog. The antibodies are specific for either influenza A or influenza B proteins, including hemagglutinin (HA), matrix protein (M1 and M2), non-structural protein 1 (NS1), neuraminidase and nucleoprotein (NP).