A research study set to be published in the Journal of Experimental Medicine by a team at the Max Delbrück Center for Molecular Medicine (MDC) has identified a protein called Pdap1 that supports B cells from stress-induced cell death while encouraging antibody gene diversification.

B Cells’ Role in the Immune System 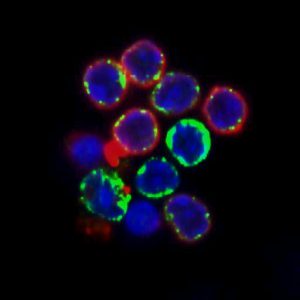 The protein Pdap1 (red) is located in the cytoplasm of B cells. Credit: Di Virgilio, MDC.

The body’s defense system heavily relies on B lymphocytes (B cells) to produce antibodies that target and destroy pathogens. B cells interact with T cells to play a large role in adaptive immunity, essentially protecting the body against foreign substances including allergens and toxins.

To ensure an effective humoral immune response, mature B cells must modify their genes to produce antibodies that best match the features exposed on the surface of the invading pathogen. During this immune response, antibody transformation occurs through class-switch recombination (CSR). During CSR, B cells change the isotype of the antibodies they produce, often by changing from isotype IgM to isotype IgG, which can often more effectively remove the specific pathogen.

The Discovery of PDAP1 in Class-Switch Recombination

The team continued experimenting with mice where the gene for Pdap1 was specifically switched off in B cells. Results indicate that Pdap1 is also key for somatic hypermutation, a process in which an antibody mutates after B cell activation. Without the protein, fewer mutations occurred in the pathogen-recognizing part of the antibody, which consequentially reduces its ability to produce the highly specific variants needed to fight foreign substances.

Team leader, Dr. Michela Di Virgilio notes, “A particularly surprising finding to come out of our in vivo experiments, however, was that mouse B cells that are unable to produce Pdap1 die far more easily than is normally the case.” The research team concluded that the protein protects B cells from stress-induced cell death. As mature B cells begin to grow and proliferate, they commonly experience cellular stressors and Pdap1 helps B cells deal with this stress.

“So Pdap1 not only helps the B lymphocytes to consistently produce the effective antibodies,” says Di Virgilio. “It can also be seen as their protector.” Lacking the protein, the B cell begins a process that ultimately leads to cell death.

Do you work in this field of research? If so, you may be interested in viewing our reagents that can be used for B cell research. Some of the reagents include: