Scientists Show How Memory Function Could be Preserved After Brain Injury

Researchers at the University of California – Riverside examined the effect of the immune receptor Toll-like Receptor 4, or TLR4, on how memory functions in both the normal and injured brain. The results in this study published in Brain, Behavior, and Immunity shows the potential of treatments for limiting memory loss after brain injury.

What is TLR4 and its Role in Memory?

Toll-like receptor 4 (TLR4) of the toll-like receptor family is a transmembrane protein, which belongs to the pattern recognition receptor (PRR) family. Activating TLR4 leads to an intracellular signaling pathway, NF-κB and inflammatory cytokine production which is responsible for activating the innate immune system. What is TLR4’s role in memory? In the normal brain, the activity of neurons are suppressed by TLR4 and in the injured brain, TLR4 increases neuronal activity. TLR4 increases excitability in the hippocampus, which is the area of the brain that is responsible for learning and memory. Memory deficits are a large long-term consequence in most brain injuries and any treatment to minimize it, is surely of clinical interest.

In this study, the researchers used a rat model and concluded that inhibiting TLR4 by giving Resatorvid, (currently in clinical trials for various diseases) improved memory, not only for a week, but up to a month after injury. Brain injuries that were studied, included those resulting from common sports and traffic accidents. In one experiment, rats swam to an endpoint or platform in a maze (see figure) and then repeated a minute later to see memory behavior between a normal and fluid percussion brain injury (FPI) rats. The rats with the brain injury took a longer time finding the platform in the maze compared to the control group.  However, when TLR4 was inhibited, memory improved. Additionally, the scientists performed another experiment by blocking TNFα, a downstream effector of the TLF4 pathway.  Data showed that TNFα both contributes to TLR4 regulation of excitability in the injured brain and also preserves memory. 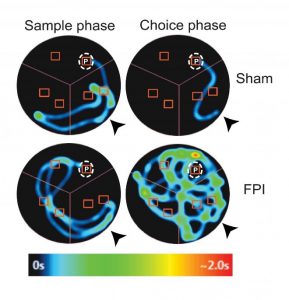 Memory deficit one week after brain injury. The image shows the swimming path of a rat released in a water maze at the arrow trying to find a hidden platform P on first trial (sample) and a minute later (choice). The uninjured rat (sham) moves rapidly to the platform showing it remembers the location (good spatial working memory). The injured rat (FPI) has difficulty remembering the location of the platform. Color code below indicates time spent at a location. The trajectory shows the path taken and is color coded for time spent at any given spot. Credit: University of California- Riverside

How exactly TLR4 affects memory function in the normal and injured brain is still not clear. Next steps for this research group is to determine how TLR4 signaling through glial mediators suppresses network excitability and facilitates memory performance in the normal brain. The researchers also plan to explore how neuronal TLR4 signaling after injury can be selectively manipulated. In conclusion, inhibiting the TLR4 pathway after a brain injury should be further explored as a potential treatment for preserving memory loss and could be a medical breakthrough in clinical neuroscience.

Do you work in this field of research? If so, you may be interested in viewing our other reagents that might be related to TLR4 signaling or neurobiology research. Some of the reagents include: