Proteins in Your Blood Can Predict Your Age

Age is more than your appearance or number of birthdays, it’s your physiological clock that can tell you about your health. Scientists at Stanford University School of Medicine are giving us a look at our internal age by looking at the levels of 373 different proteins in our blood. As reported in Nature Medicine, the study shows that physiological age does not progress at a perfect pace for everyone.

Looking at the Proteins 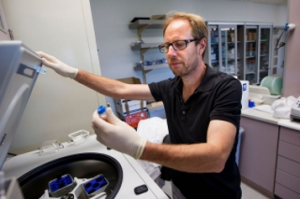 For the study, plasma was collected from 4,263 people ages 18-95, and the proteins were analyzed. The data showed that there are three distinct life-points where age seems to hit an inflection point: on average ages 34, 60 and 78. These ages showed distinct changes in the blood-borne proteins, while at other points in life, these proteins remained at more consistent levels.

From the data, the investigators were able to build a formula for a biological clock that predicts age. The clock was built by looking at the protein levels within groups of people, rather than individuals. Their resulting clock proved to be incredibly accurate at predicting peoples’ age, with an average error of three years at most.

Further, whenever the clock was extremely inaccurate for one person, it proved that individual was remarkably healthy for their age. Hence, the clock was predicting that their physiological age was lower than their actual age.

While the clock seems to be accurate, it is not yet ready for clinical applications. However, with further validation there is great potential for benefits in the gerontological community. The application has the potential to identify individuals who are aging too rapidly so they could seek out lifestyle or therapeutic intervention.

This application also has the potential to help with early diagnosis of aging diseases such as Alzheimer’s disease or cardiovascular disease. Early diagnosis could greatly benefit some of these debilitating illnesses that often remain undetected.

It may sound like a daunting procedure to analyze 373 proteins, but in fact it only takes a drop of blood. Additionally, Dr. Tony Wyss-Coray noted, “After nine or 10 proteins, adding more proteins to the clock improves its prediction accuracy only a bit more. With machine learning, you could potentially make a test with good accuracy based on just those nine proteins.”

Do you work in this field of research? If so, you may be interested in viewing our other reagents that can be used for Alzheimer’s research. Some of the reagents include:

We also offer a variety of blood-related reagents that can be used for cardiovascular research: