As of July 2019, researchers at the University of Guelph were the first to discover how the cannabis plant produces pain-relieving molecules that are extremely effective in reducing inflammation. Their complete findings were published in the journal Phytochemistry.

This research opens the door for future cannabis studies and the production of natural pain relief treatments that are more effective than existing options and offer relief without the risk of side effects and addiction. 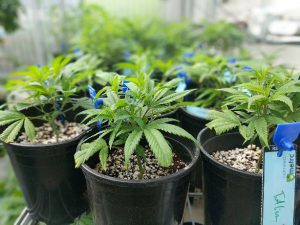 Opioids work by blocking the brain’s pain receptors to reduce the sensation of pain. While effective, opioids also carry a high risk of addiction and side effects. With high addiction rates come high rates of drug overdose. According to the CDC, “from 1999 to 2017, more than 700,000 people have died from a drug overdose”. It is estimated that about 68% of these deaths involved opioid use.

It’s evident that there’s a market for alternative pain relief options for acute and chronic pain. According to Professor Tariq Akhtar, who worked on this study with Professor Steven Rothstein, “These [cannabis] molecules are non-psychoactive and they target the inflammation at the source, making them ideal painkillers.”

As a result of this study, the researchers were able to identity how cannabis produces two “flavonoids” known as cannflavin A and cannflavin B. The flavonoids are nearly 30 times more effective gram-for-gram than acetylsalicylic acid (sold as Aspirin).

These molecules were first identified in 1985; however, further research was stalled due in part to cannabis being highly regulated. With cannabis now legal in Canada, Akhtar and Rothstein were able to restart the research and understand how Cannabis sativa biosynthesizes cannflavins.

If you’re interested in learning more about cannabis’ pain-relieving compounds, check out this video from the University of Guelph.

The objective of the study was to understand how cannflavin A and cannflavin B are produced. This was relatively straightforward using the complete genome of Cannabis sativa, which is publicly available. Using this genomic information, classical biochemistry techniques were applied to identify which cannabis genes are required to produce the cannflavins.

The problem with these molecules is that they are produced in relatively low amounts in the cannabis plant, so it’s not possible to engineer the plant to naturally higher quantities. Instead, the researchers are now working on developing a biological system that can create these molecules in large amounts.

The research team is now partnering with a Toronto-based company, Anahit International Corp., to biosynthesize the cannflavins outside of the cannabis plant in order to develop anti-inflammatory medicines that are safe and effective. The idea is for Anahit to commercialize the use of cannflavin A and B through creams, pills, sports drinks, patches, and more.

Do you also work on cannabis research? You might be interested in a variety of cell lines from Indiana University that express cannabinoid receptors, as well as the following reagents: