New research from Cincinnati Children’s Hospital is helping scientists to understand a protein named Merlin, which plays an important role in the development of a condition known as neurofibromatosis 2 (NF2). A new study led by Robert Hennigan, PhD and Nancy Ratner, PhD and published in Science Signaling used a technique, known as proximity biotinylation, to identify more than 50 proteins that interact with Merlin.

This information will help scientists to further explore how Merlin functions and develop drug therapies to treat NF2. Further, this technique represents a simpler, more cost-effective mechanism for studying how proteins bind to each other, which could be useful in other areas of disease research, including battling cancer. The research cites Kerafast’s Ad CMV Cre, a ready-made control adenovirus used to introduce Cre into target cells. 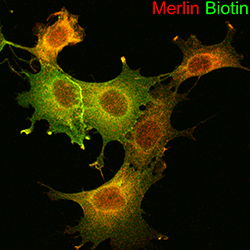 NF2 is a rare genetic condition (approximately 1 in 40,000 people affected) which results in tumors that form along nerve fibers. This includes tumors along auditory nerve fibers which causes hearing and balance problems. The tumors do not spread to other areas but cause severe impairments for those with the condition. Further, if the tumors grow too big, they must be removed surgically.

The NF2 gene produces the Merlin protein, which stands for “Moesin-Ezrin-Radixin-Like protein” and is connected to a larger family of proteins. This new technique of studying Merlin looks at this interconnected family of proteins, instead of just Merlin. This will help scientists understand how Merlin functions, and therefore inform drug therapies designed to treat NF2.

A technique known as proximity biotinylation has been used for years to identify protein-protein interactions. However, new technology to advance the speed and sensitivity of the technique assured Hennigan that, “There is, essentially, no question that the proteins we found are actually binding to each other.” The advanced technique allowed the researchers to not only identify proteins that bind to Merlin, but to also visualize where those interactions take place.

The data suggests that Merlin helps other cells to understand their physical environment, including what other cells belong around them. Therefore, when the environment gets too crowded, Merlin can shut down excess cell growth. However, when Merlin fails, a tumor can start to form and grow.

In the future, proximity biotinylation has the potential to be used similarly to develop other drug therapies. The technique allows you to more efficiently view all the protein interactions, instead of just zooming in on your target protein. By doing this, scientists can gain a more complete picture of how the target protein functions. For example, one of the key findings about Merlin’s function suggests that targeting mechanical signals between cells has potential applications for the development of future cancer therapies.

Do you work in this area of research? If so, you may be interested in viewing all our available adenoviruses. Additionally, we offer a variety of reagents for cancer and neurobiology research.

The control adenovirus used in this study can be found on our website here. Other researchers have cited Ad CMV Cre in the following references: