Researchers at Boston Children’s Hospital and MIT have recently been able to show that mini-antibodies called nanobodies – previously discovered more than 20 years ago – may be able to resolve an issue in the cancer field: making chimeric antigen receptor (CAR) T-cell therapies functional in solid tumors.

Their research was published in the journal PNAS, and we were pleased to see they used the MC-38 cell line, murine colon adenocarcinoma cells made available in the Kerafast catalog by the National Cancer Institute.

Mini-antibodies, consisting of only two heavy protein chains, were first found in the blood serum of camels back in 1989. They have since been engineered into smaller antibodies called nanobodies, which offer unique properties such as high solubility, enhanced tissue penetration and enhanced targeting capabilities. 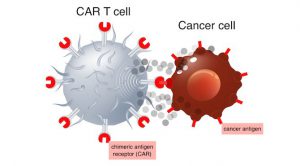 CAR T-cell therapy engineers a cancer patient’s own T cells to make them more efficient at killing cancer cells. However, this method has not been effective at eliminating solid tumors, as it has been difficult for researchers to find cancer-specific proteins on solid tumors that can serve as safe targets.

Now, the research team is harnessing the nanobodies to carry imaging agents that allow the precise visualization of metastatic cancers. These nanobodies are being targeted at the tumors’ extracellular matrix, or surrounding environment.

The researchers decided to target the extracellular matrix in CAR T-cell therapy as well. They created CAR T cells covered with nanobodies that recognize specific proteins in the tumor environment, carrying signals that direct them to kill cells they bind to. In both melanoma and color cancer models, the engineered T cells slowed tumor growth and increased survival rates, without causing any side effects.

The engineered T cells work through a combination of reasons, according to the researchers. The cells cause damage to the tumor tissue, which stimulates inflammatory immune response. Targeting EIIIB – a variant of fibronectin – damages blood vessels in a way that decreases blood supply to tumors. In turn, they become more vulnerable to cancer drugs.

Taking the Technology to the Next Level

The team hopes this approach could be used to treat other solid tumor cancers, including pancreatic and bile duct cancers. In addition, the nanobodies could eventually carry a cytokine to boost immune response to tumors or radioisotopes to irradiate them at close range.

“CAR T cells are the battering ram that would come in to open the door; the other elements would finish the job. In theory, you could equip a single T cell with multiple chimeric antigen receptors and achieve even more precision,” senior author Dr. Hidde Ploegh said in a press release. “That’s something we would like to pursue.”

Do you work in this line of research? Kerafast offers the MC-38 cell line used in the study, as well as a variety of related lab-made cancer research reagents: