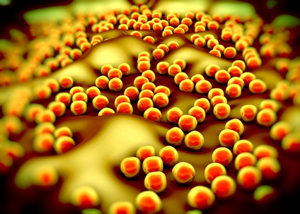 CRISPR, which stands for clustered regularly interspaced short palindromic repeats, is part of an adaptive immune system utilized by bacteria to protect against infection by viruses. CRISPR-based immunity works by integrating viral sequences into the bacterial CRISPR locus and allows the cell to recognize viruses and ultimately clear an infection. CRISPR activity requires CRISPR-associated genes (cas) that encode proteins needed for an immune response. This system is now being widely used as a genome editing tool.

In this study, CRISPR-Cas9 inserted into SaPIs was utilized to target agrA, which is universally conserved in staphylococcal bacteria. Once the ABDs enter the bacterial cell, they can create double-strand breaks at the chromosomal agrA locus to directly kill the bacteria. The efficacy of the ABDs was tested in mice using a subcutaneous abscess model. Mice were injected subcutaneously with bacteria and given a control or ABDs. Control mice developed abscesses within 72 hours, while the ABD treatment completely prevented abscess formation. Finally, mice were given a lethal dose of bacteria followed by treatment with a control or the ABDs. All control mice died within 12 hours, whereas 14 of the 15 mice treated with ABDs survived.

These results demonstrate that ABDs are a promising alternative to antibiotics, allowing specific virulence genes to be targeted to directly kill bacteria. In addition, ABDs do not negatively impact the microbiome, which commonly leads to the development of secondary infections in hospital settings. Next steps will be to test the efficacy of ABDs on other strains of bacteria as well as develop ABDs targeting other virulence factors.