A recent study in the journal Immunity describes the isolation and identification of two monoclonal antibodies that effectively protect against three different Ebola viruses.

The research was led by Dr. James E. Crowe, Jr. of Vanderbilt University, whose B Cell Activating Feeder Cell Line, used to generate B cell cultures yielding human monoclonal antibodies, is available via the Kerafast catalog. 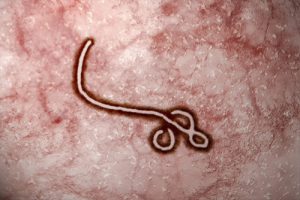 The Crowe lab studies viral immunology and has developed highly efficient methods to isolate white blood cells from virus survivors to produce antibodies targeting a specific virus. They’ve applied the technique to viruses ranging from Zika to HIV to Ebola.

The new study focuses on Ebola, the hemorrhagic fever virus that killed more than 11,000 people in a West African outbreak between 2014 and 2016. The virus, spread through human-to-human transmission, typically kills around 50% of the people it infects.

The researchers first obtained blood plasma from Ebola survivors in Africa. They then isolated monoclonal antibodies from the white blood cells and found that two antibodies demonstrated potent activity against the three clinically relevant Ebola viruses: Zaire, Sudan and Bundibugyo.

The antibodies, EBOV-515 and EBOV-520, effectively neutralized the three Ebola viruses in vitro, as well as offered protective immunity in animal models. The antibodies are therefore promising therapeutic candidates for developing a broadly protective pan-Ebola virus treatment, which could be given to those at high risk for Ebola virus infection.

“Our team was very excited to discover these new antibodies that have the capacity to treat all ebolaviruses,” said Dr. Crowe in a press release. “They appear very promising for development as a treatment and prevention for Ebola virus disease.”

For more information about the Crowe lab’s research, check out the below blog posts:

You might also be interested in the group’s B Cell Activating Feeder Cell Line, which offers a method for generating recombinant human monoclonal antibodies from single antigen-specific B cell clones. Other related reagents include: