A new University of Toronto study uncovers how a protein complex helps dividing cells accurately split their DNA between two daughter cells. The study’s findings, published in The Journal of Cell Biology, provide insight into the development of kidney tumors, developmental disorders and other cancers.

When a cell divides, it is important that its chromosomes are equally segregated between both daughter cells. Having too many or too few chromosomes leads to well-known issues; for example, an extra copy of chromosome 21 leads to Down syndrome, while an absence of one X chromosome causes Turner syndrome. Irregular chromosome division is also found in cancerous cells.

In the new study, the research team found that a known protein complex called RSC (Remodels the Structure of Chromatin) is involved in chromosome segregation. RSC was previously known for its role in switching genes on and off. Prior studies also found that RSC mutations were present in rhabdoid tumors, a highly aggressive form of kidney cancer, while mouse cells that lose RSC function can turn cancerous. However, there was no evidence of RSC’s involvement in chromosome segregation. 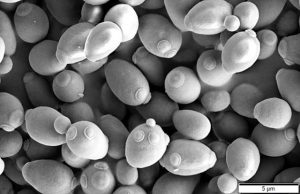 Working in budding yeast, the researchers discovered that RSC helps separate duplicated chromosomes equally between daughter cells by helping form the centrosome. The centrosome is an organelle that produces filaments responsible for grabbing each set of chromosomes and pulling them apart.

In the study, yeast cells lacking RSC function had a higher number of chromosomes and more centrosomes, making proper chromosome segregation difficult. This could help explain how RSC is involved in cancer development in humans.

“It’s always surprising to think about how fundamental processes in yeast also take place in humans,” lead author and PhD candidate Tina Sing said in a press release. “We think that our study gives some insight into this observation in cancer cells and we think it’s possible that this complex is also helping with chromosome segregation in human cells.”

If you work in this area of research, check out our selection of unique lab-made reagents for cell cycle research, including antibodies for detecting Toxoplasma gondii Centrin-1, a calcium-binding phosphoprotein found in the centrosome, and Dynein Light Chain Tctex-Type 1, involved in centrosome positioning.