The human microbiome is a community of bacteria, viruses, archaea, and eukaryotic microbes that colonize the body and can influence a variety of physiological functions. The microbiota of the gut is exceptionally diverse compared to other sites of the body. Within the gastrointestinal (GI) tract alone, trillions of bacteria representing over a thousand species can exist with considerable variations between individuals.

Changes in the microbiota have been attributed to a variety of diseases, including inflammatory bowel disease, irritable bowel syndrome, obesity, and cardiovascular disease, to name a few. Recent evidence also suggests a link between the gut microbiota and aging. The elderly display distinct variations in the populations of bacteria within their GI tracts that may affect frailty and disease development. 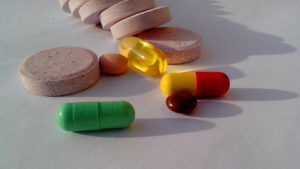 The gut microbiota is known to influence brain development, function, and behavior through bidirectional signaling known as the gut-brain axis. Microbes and their metabolites can provide metabolic, immunological, endocrine, and neuronal signals via the gut-brain axis. Disruption of this pathway has been shown to be involved in the pathogenesis of a variety of diseases. In fact, probiotic bacteria have been identified as potential therapeutics to treat certain diseases as well as promote longevity in mice and Caenorhabditis elegans. To further study the effects of probiotic treatment on aging, researchers at McGill University treated Drosophila melanogaster with probiotics and synbiotics (probiotics with novel prebiotics) and assessed age-related changes. Their findings were recently published in Scientific Reports.

Drosophila have previously been demonstrated to show distinct variations in the gut microbiota composition dependent on age, as well as immunosenescence and intestinal barrier dysfunction that is similar to what is seen in aging humans. In the present study, Dr. Satya Prakash and colleagues studied Drosophila that were fed a normal diet, a diet with probiotics, or a diet with their novel synbiotic formulation. Both probiotics and synbiotics significantly increased longevity. Metabolic stress associated with aging, including weight, glucose levels, and triglyceride levels, were assessed and found to be decreased in Drosophila fed the synbiotic diet.

Chronic low-grade inflammation, intestinal dysplasia, and an inability to mount an appropriate immune response occur with aging. The gut microbiota of aging individuals is altered with increased levels of pro-inflammatory bacteria and a reduction in bacteria with anti-inflammatory properties. Additionally, the intestinal epithelial in aging individuals becomes leaky and allows bacteria and their products to enter the bloodstream to cause chronic inflammation. Treatment with probiotics and synbiotics led to an increase in production of antimicrobial peptides important in the innate immune response against infection.

Mitochondria are believed to play a key role in aging. As people age, there is a loss in mitochondrial functionality due to a reduction in mitochondrial numbers, loss of energetic capacity, loss of protein quantity, and mutations in mitochondrial DNA. The probiotic and synbiotic diets increased mitochondrial activity compared to controls as well as decreased oxidant and lipid peroxidation that are important in neurodegeneration and cognitive impairment in Alzheimer’s disease.

As we age, we become more susceptible to a multitude of diseases. This study provides evidence that treating the gut first, through probiotic and synbiotic therapeutics, can alleviate some of the degenerative health effects that occur with aging. Further understanding of the gut microbiota and the beneficial properties of using probiotics and synbiotics may lead to preventative treatments for many common age-related diseases.

If you conduct research on age-related diseases, check out our catalog of neurobiology, obesity, and cardiovascular reagents provided to us by our many academic partner institutions.