How red blood cells get their shape

Red blood cells must maintain a distinct dimpled shape as they travel through the body, returning to form even after pushing through narrow capillaries. Misshapen red blood cells are associated with disorders such as sickle cell anemia, and though red blood cells are well-studied, there are still unanswered questions about how healthy ones properly maintain their shape. A new study from The Scripps Research Institute, published in the Proceedings of the National Academy of Sciences, demonstrated that a protein called myosin IIA plays a key role in the process.

Globally, approximately 300,000 children are born with sickle cell anemia every year. In the United States, the disease disproportionally affects African-Americans; according to the Centers for Disease Control and Prevention, sickle cell disease occurs in about 1 out of every 365 African-American births. There is currently no cure for the disorder.

In sickle cell anemia, red blood cells are deformed from their typical rounded shape to crescent moons or sickles. These misshapen cells are rigid and sticky, causing them to get stuck within blood vessels and impeding the flow of oxygen throughout the body. As a result, patients don’t get enough oxygen to feel energized. Symptoms include fatigue, pain and frequent infections. 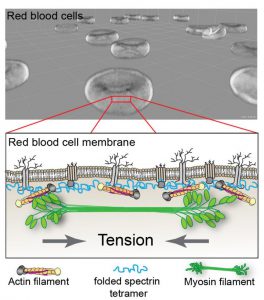 The question is: how do healthy red blood cells maintain their distinct dimpled shapes? Do they passively bounce back into shape – or is it a mechanical process in which the cell membrane is actively contracting and relaxing to sustain its shape?

The Scripps research team found that red blood cells use a protein called myosin IIA to actively regulate their shape. Red blood cell myosin IIA – which is related to the protein that drives muscle contraction in other parts of the body – assembles into barbell-shaped structures called filaments. Both ends of the filaments then pull on red blood cell actin to regulate the stiffness of the cell membrane.

“You need active contraction on the cell membrane, similar to how muscles contract,” senior author Dr. Velia Fowler said in a press release. “The myosin pulls on the actin to provide tension in the membrane, and then that tension maintains the biconcave shape.”

The team also treated the cells with a compound called blebbistatin, which stops myosin from working properly. The treated cells lost their shape, confirming that myosin IIA is key for maintaining red blood cell shape.

Up next, the team plans to continue studying the regulation of myosin IIA’s activity in red blood cells, in particular how myosin IIA filaments are phosphorylated to become more stable.

If you work in this area of research, check out our available reagents for studying the cardiovascular system or cell structure and motility, including: