Scientists from the University of Utah Health are using animals’ unique traits to identify regions of the human genome that might affect our own health and disease. Their study was recently published in the journal Cell Reports. 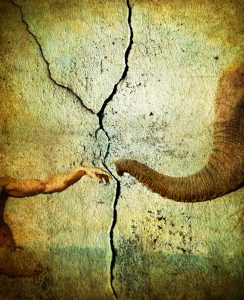 The research team focused on the noncoding region that compromises 98% of the mammalian genome, but whose role in health and disease remains mostly unclear. They looked at the noncoding regions of five animal genomes – elephant, hibernating bat, orca and dolphin, naked mole rat, and thirteen-lined ground squirrel – to identify regions that evolved rapidly.

“People used to call the noncoding regions junk DNA, but I see it as a jungle that has not been explored,” senior author Christopher Gregg, PhD, said in a press release. “We are exploring the noncoding regions to try to discover new parts of the genome that might control different diseases.”

In the new study, the researchers identified and studied thousands of accelerated regions within each animal genome, the idea being that accelerated evolution may have bestowed the recognizable traits we attribute to each species. These include the wings of a bat, the massive body size of the elephant, and the unique coloring of the thirteen-lined ground squirrel.

Looking at the thirteen-lined ground squirrel genome, the researchers found elements linked to coloration and pigmentation, which could help in studying albinism and other skin conditions. In addition, the naked mole rat genome provided insights about eye development that could aid in the study of glaucoma.

“This method allows us to shine a light on nature’s potential solutions to disease across the entire animal kingdom,” said co-author Joshua Schiffman, MD.

Elephants have been a particular research interest for the group due to the animal’s natural resistance to cancer, despite the risk factors of a large number of dividing cells and long life span. In a previous study, the researchers identified a potential role for extra copies of the tumor suppressor gene p53 that increase the elephant’s ability to eliminate pre-cancerous cells with DNA damage.

In the new study, the researchers identified three additional elements in the elephant genome linked to DNA repair that could help in the study of cancer resistance. They are now investigating how these elements can be applied to human medicine.