Microglia cells play an essential role in the central nervous system. Accounting for 10-15% of all cells in the brain, these phagocytic cells are involved in neural development, protection from immunological threats, and inflammatory processes. 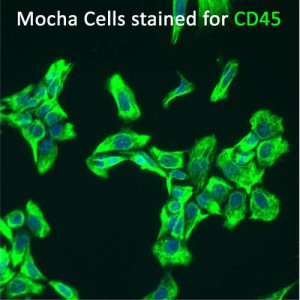 In a new study, published in the December issue of Molecular and Cellular Neuroscience, an international team of researchers describe the creation and characterization of a new microglial cell line derived from rat cochlea, the auditory portion of the inner ear. The microglial cell line is now available to researchers worldwide via the Kerafast website.

Microglia cells have been widely studied, but little is known about the biology of microglia in the cochlea, a site vulnerable to damage by aging, noise and toxic compounds. The new cell line provides a useful model system for in vivo and in vitro studies of cochlear microglial behavior.

The study’s lead author, Dr. Gail M. Seigel of the University at Buffalo, has prior experience in creating immortalized cell lines. Her R28 and E1A-NR.3 retinal cell lines, also available via the Kerafast catalog, have been used successfully for more than 20 years to study retinal cell behavior. She’s even shared tips for cell line development in a blog post called How to Create a New Cell Line.

In the new study, Dr. Seigel and team used a microglial marker called CD11b to detect microglia in post-natal rat cochlea and generate an immortalized cell line. They called the cell line Mocha, for microglia of the cochlea.

The researchers characterized the Mocha cell line for microglial markers and functions. For example, they used immunocytochemistry, as well as a targeted gene array, to demonstrate that the cells express genes typical of microglial cells. The results showed that the cell line expresses markers such as CD45, CD68, TMEM119 (a very specific microglial marker) and more. Importantly, the cells were not seen to express neuronal beta tubulin.

The researchers also looked at the function of the Mocha cells. In the central nervous system, microglia typically respond to stimulation by secreting cytokines. In the study, the researchers treated the cells with lipopolysaccharide (LPS) and the cells responded as expected, by releasing the cytokines IL-1beta, IL-12, IL-13 and RANTES. As further evidence of microglial function, the Mocha cells were shown to phagocytose fluorescent beads at 37°C but not at 4°C.

The Mocha cell line has been authenticated and confirmed to be of rat cell origin with no contamination. Researchers worldwide can now use the cell line for drug screening, co-culture studies, and other studies of cochlear microglial behavior. For more information about using the cell line in your research, click here.

Finally, if you work in this area of science, you may also be interested in several other available reagents: