CRISPR (pronounced crisp-er) has been generating a lot of excitement in scientific research lately. Read below to check out what all the buzz is about! 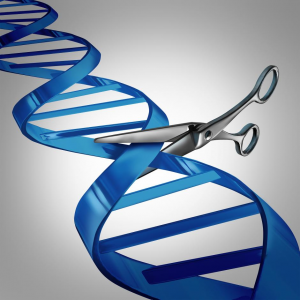 Clustered Regularly Interspaced Short Palindromic Repeats (CRISPR) were first discovered and characterized in archaea through the work of Francisco Mojica in the 1990s and early 2000s. Mojica hypothesized that CRISPRs were an important component of the bacterial immune system that served to combat bacteriophages, viruses that infect bacteria. After a bacterium “sees” a virus for the first time, it incorporates some of the viral genetic code into its own DNA to serve as a memory for the next time it becomes infected. The incorporated foreign DNA is broken up by spacer sequences, which themselves code for CRISPR RNAs or crRNA. Bacteria also express Cas9, a nuclease enzyme that cuts DNA at specific locations. Once crRNA is transcribed, it guides the Cas9 protein to cleave the foreign DNA at specific sites, eliminating the invader (Mojica et al, 2005).

After Mojica published his work, other investigators saw potential therapeutic applications for CRISPR. Researchers at the Broad Institute applied the CRISPR-Cas9 system to edit DNA in eukaryotic cells. They showed that giving a cell Cas9 and guide RNAs (gRNA) similar to the crRNA in bacteria could eliminate genes from the cell’s own DNA (Cong et al, 2013). The gRNAs bring Cas9 to a specific site on DNA to make a break, creating a genetic disruption which often results in loss of that gene. Since the 2013 publication, researchers have developed gRNA libraries for a wide range of targets.

Other popular genetic modulation tools such as silencing RNA (siRNA) or short hairpin RNA (shRNA) target RNA between transcription and translation. Because the target gene is still present in the DNA, it is actively being transcribed into RNA. RNA interference (RNAi) is not a total knockout but is a partial knockdown of a protein. CRISPR-Cas9 targets the source DNA so that the target gene is never transcribed in the first place. This is often referred to as “genome editing”.

As CRISPR has become more widely used, many academic institutions and biotechnology companies have used the system to identify novel targets for disease treatment that may have previously been missed with RNAi. Scientists use this system as a research tool in target validation to show dependency on certain disease drivers. If the driver is eliminated, the cell should have some aberrant phenotype such as cell death or senescence. CRISPR is now also being used in animal studies to add support for different disease targets. This system has quickly become an important tool to advance drug discovery programs.

Medical science is making great strides in using CRISPR to correct genetic defects in human embryos. The main idea is to use CRISPR-Cas9 to enter an embryo and cut out the offending gene without disrupting normal genes. This past August, researches from the Oregon Health and Science University published a paper in Nature demonstrating success in editing human embryos that had a mutation in MYBPC3. This mutation has been shown to cause the heart muscles to thicken, a leading cause in sudden death in young athletes known as hypertrophic cardiomyopathy. The experiment involved 58 embryos and served to alleviate some of the worry surrounding CRISPR. Like other genetic modulation tools, CRISPR can have unwanted off-target effects: Cas9 can cut at sites other than the primary site of interest, causing loss of other genes that may be important for development. Using more sophisticated methods, the researchers saw no unwanted off-target effects. They also saw only one case of a “mosaic”, or embryo that had some cells with the edit and some cells without. This technology could be applied to other heritable defects that currently have a poor prognosis or limited treatment options.

Interested in using CRISPR-Cas9 in your research? Check out these related products: