Every fall, people around the world are faced with the onset of flu season. The flu, a contagious respiratory disease characterized by coughing, fatigue and sore throat, sickens millions of people and kills hundreds of thousands globally each year. While most people do not require treatment and will recover in less than two weeks, children, older adults and pregnant women risk the development of severe flu-related complications that can lead to hospitalization or even death.

The severity of the flu varies each year, and the recommended method of prevention against contracting the flu is to be vaccinated annually. Researchers determine the components of the seasonal flu vaccine through annual surveillance of circulating viruses and forecasting of the upcoming season. The flu vaccine is created using several methods, with the most common being cell culture-based or egg-based. The egg-based method is most frequently used and involves injecting the candidate vaccine virus into fertilized hen’s eggs. The virus is able to replicate within the egg and after a period of time, the fluid containing the virus is collected, inactivated and purified. In the cell-based method, the candidate vaccine virus is inoculated into mammalian cells, followed by virus collection, inactivation and purification. 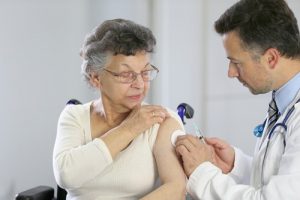 Although the first flu vaccine was developed more than 70 years ago, challenges to creating an efficacious vaccine still remain. Not all strains of the virus display high infectivity within fertilized eggs, leading to poor growth of the virus and delays in production or exclusion from the vaccine. Additionally, the ability of the virus to mutate quickly has also been demonstrated to occur during the vaccine production process, resulting in a vaccine containing an antigen that is dissimilar to the candidate vaccine virus.

To address the challenges in the flu vaccine production process, researchers at Duke University have developed a new process that leads to high virus replication and prevents virus mutation. Their findings were recently published in mBio.

Dr. Nicholas S. Heaton and his colleagues sought to develop a process in which high titers of virus expressing the immunogenic proteins of interest could grow successfully in fertilized chicken eggs. Hemagglutinin (HA), a glycoprotein on the surface of the flu virus that binds the virus to host cells, is one of the major antigens targeted in the flu vaccine. Receptors for HA in humans and chickens differ, and the current production methods lead to adaptive mutations as a result of these differences, lowering efficacy of the vaccine. To remedy this problem, the researchers engineered a virus particle that expressed an egg-adapted HA and a human-adapted HA with the hopes that the addition of the egg-adapted HA would allow entry into the cells without the typical mutations that occur with human-only HA viruses. The addition of the egg-adapted HA resulted in drastically increased virus production and no mutations were found in the human HA protein. This combination or bivalent virus remained functional and elicited a strong immune response in mice.

To further test their virus production method, the researchers applied it to a strain of influenza, the Fujian strain, that was unable to be grown in fertilized chicken eggs in 2002. The Fujian strain was the major circulating strain in 2002 but had to be excluded from the seasonal vaccine due to the difficulties in production. Consequently, the efficacy of the flu vaccine was low that year. By combining the egg-adapted HA with the Fujian strain HA, the researchers were able to produce the virus in eggs in high titers. Still in its early stages, this new method of candidate vaccine virus engineering addresses many of the problems in current flu vaccine production and holds promise for improved flu vaccines in the future.