Epilepsy is a brain disorder that causes seizures, sudden surges of electrical activity in the brain. It is the fourth most common neurological disorder, affecting approximately 2.9 million people in the United States, and one challenge for those affected is predicting the onset or progression of chronic seizures. A study from the University of Colorado, recently published in the journal Redox Biology, provides new hope for those with the disorder.

The new study looked at the reduced and oxidized forms of an amino acid, cysteine and cystine, respectively. The researchers sought to determine if the ratio of these two compounds could be used as a biomarker for predicting the onset or progression of epileptic seizures. 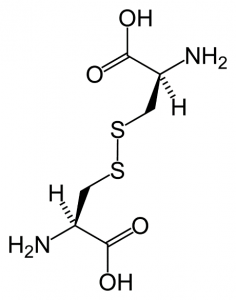 Cystine, the oxidized form of the amino acid cysteine, and the subject of a recent epilepsy study.

To accomplish this, the team induced chemical seizures in rats. Plasma, or the liquid portion of the blood, was taken from the affected rats 48 hours and 12 weeks after the seizures to mimic acute and chronic epileptic conditions. The researchers found that the plasma cysteine/cystine ratio was decreased more than 60% in rats with acute epileptic responses. In rats with chronic epilepsy, the ratio was reduced more than 37%. Moreover, when the rats were treated with an antioxidant known to prevent epileptic brain injury, the cysteine/cystine ratio was unaltered.

The researchers concluded that a reduced cysteine/cystine ratio in plasma could be used as a redox biomarker in epilepsy. “Currently the field of epilepsy lacks peripheral blood-based biomarkers that could predict the onset or progression of chronic seizures following an epileptogenic injury,” study author Dr. Manisha Patel said in a press release. “We are confident that this study is a significant step toward changing this, and will one day help those living with temporal lobe epilepsy.”