How well do you know chemokines? 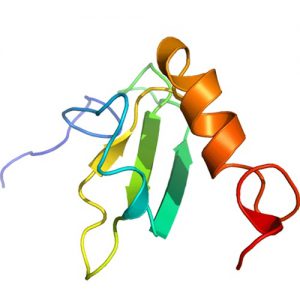 Human Chemokine CXCL5, available from the lab of Dr. Brian F. Volkman at the Medical College of Wisconsin.

Chemokines are signaling proteins secreted by cells, whose main function is to act as a chemoattractant to guide the migration of nearby cells. Part of the cytokine class of molecules, chemokines are important components of the immune system, forming a complex regulatory network that connects the innate and adaptive immune systems. Chemokines bind G protein-coupled receptors located on the surface of leukocytes, or white blood cells, where they serve as primary mediators of inflammation while also directing the homing and maturation of lymphocytes.

Although the activity and function of chemokines has been known for some time, there are some very interesting facts about this critical class of signaling molecule. How well can you answer the questions below?

Do you work in this area of research? Check out our selection of cytokines and chemokines, available direct from leading academic laboratories. You may also be interested in our full list of immunology reagents, including the LUVA human mast cell line, neutrophil imaging agent or lymphocyte cell lines.