How Well Do You Know Your DNA? 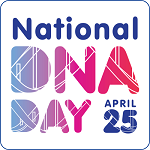 This April 25 marks the 14th annual National DNA Day, an event organized by the US National Human Genome Research Institute (NHGRI) to commemorate the completion of the Human Genome Project in April 2003, as well as the discovery of DNA’s double helix in 1953. An interactive map on the NHGRI website shows that more than 70 DNA Day events are taking place around the United States this year, with participants including Kerafast providing institutions such as Penn State University, University of Iowa and Montana State University.

In honor of the event, we decided to compile some fun facts about thehuman genome, so you can see how well you truly know your DNA:

Are there any other DNA facts you find interesting? Let us know on Twitter or Facebook! And if you work in this area of research, check out our reagents for studying DNA damage and repair, such as the DNA-RNA hybrid [S9.6] antibody, NIH 3T3 translocation cell lines and DNA-binding fluorescent probes.