The conception of the Protein-Nucleic Acid Complex Crystal Screen came from a need that we had to crystallize DNA-protein complexes. Normally, initial crystallization conditions are found through the use of commercially purchased screens. In the case of DNA-protein complexes, these screens have proven quite unreliable. More often than not, we found that crystals produced using these screens contained protein only or DNA only despite the fact that the protein-DNA complexes used were known to be strongly associated with each other. It seemed that a lot of the conditions in the commercially available screens were actually leading to the dissociation of the protein-DNA complexes. 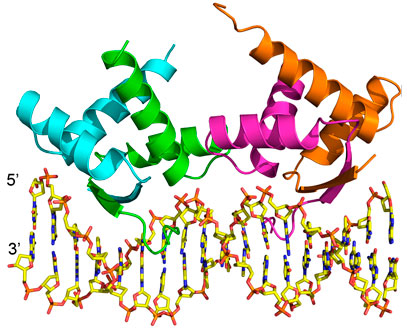 Structural overview of AmrZ – amrZ1 complex (PDB ID: 3QOQ). The Δ42 AmrZ protein binds to the 18 bp amrZ1 binding site as a dimer of dimers. One dimer is composed of chains A and B (green/cyan), while the other dimer is composed of chains C and D (magenta/orange). Adapted from: Pryor EE Jr, Waligora EA, Xu B, Dellos-Nolan S, Wozniak DJ, and Hollis T. The Transcription Factor AmrZ Utilizes Multiple DNA Binding Modes to Recognize Activator and Repressor Sequences of Pseudomonas aeruginosa Virulence Genes. PLoS Pathogens. 2012; 8(4): e1002648.

We used a technique called incomplete factorial design which has been used previously in crystallography and published on by Charlie Carter at UNC-Chapel Hill. Using the incomplete factorial method in combination with the BMCD conditions that we collected, we designed the screen. This allowed for the thousands of different crystal-producing BMCD conditions to be summarized into just 48.

Basically, the incomplete factorial method enabled us to create a screen that touches a lot of that array space and in different combinations so that almost every element is in combination at least once with one other element in the screen. Therefore, it allows you to sample a very large array space, (in our case the different parameters of PEG concentration and molecular weight, differences in pH, and differences in ionic strengths and divalent metal ions) in a relatively small screen.

Over the past few years we’ve been able to crystallize and determine structures of 10-12 different protein-DNA complexes and every single one of them has produced crystals in this screen. It’s been a tremendous tool. We have published a paper describing the methods for this that came out in Acta Crysallographica in 2012 and it’s been a tremendously useful tool for us in advancing our work. The screen was made available by Kerafast a few years ago and based on feedback that I have received from other researchers, it is a success.