Researchers are Aiming to Design a Universal Influenza Vaccine

The current flu vaccine is redesigned every year to compensate for various mutations the virus develops, and the vaccine is still not fully protective for all individuals. Researchers at MIT, Massachusetts General Hospital and Harvard University have collaborated on a potential universal flu vaccine to protect against any flu strain.

Their study, which appears in Cell Systems, introduces a vaccine that causes an immune response against an influenza protein segment that does not usually mutate. The vaccine consists of nanoparticles covered with flu proteins that encourage the immune system to create desired antibodies against that specific protein segment.

Senior author Arup K. Chakraborty of MIT indicates there is a chance the vaccine could be effective against any flu strain: “The reason we’re excited about this work is that it is a small step toward developing a flu shot that you just take once, or a few times, and the resulting antibody response is likely to protect against seasonal flu strains and pandemic strains as well.” 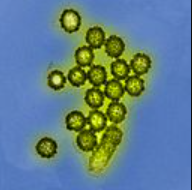 How to Target the Flu

The researchers sought to engineer a way to effectively target the conserved parts of the HA protein. Their study aimed to create antibodies known as “broadly neutralizing antibodies” to respond to any flu strain.

The team developed a computational model to explore the proposed “immunodominance” of the HA protein’s head region. The model also explored antibody affinity maturation, the process that occurs after B cells are exposed to a virus or vaccine and how this translates as to which antibodies will predominate during an immune response.

Their model was then used to look at a proposed nanoparticle vaccine from the National Institutes of Health. The nanoparticle carries the HA stem proteins at a lower density, making the proteins more reachable to antibodies and therefore allowing the stem-targeting antibodies to lead the immune response.

The model indicates another plausible solution that involves immunizing individuals with a HA stem from a virus that is similar to, but not the same strain the individual has been introduced to prior. For example, during the 2009 H1N1 influenza outbreak, much of the world was exposed to this strain via infection or vaccination. The researchers propose that if they vaccinated with nanoparticles showing HA proteins different from the 2009 version, it could confer universal immunity.

To evaluate this hypothesis, mice with human immune cells were first immunized against the 2009 H1N1 strain, and then inoculated with a nanoparticle vaccine carrying a HA stem from a different H1N1 strain. This was the most successful strategy in generating neutralizing antibodies. The researchers concluded they can provide influenza protection by refocusing the immune system’s attention to a universal vaccine target.

Do you also work in this area of research? We offer a wide variety of unique lab-made research reagents geared towards influenza and nanoparticle research. Our influenza antibody targets include Hemagglutinin (HA), Matrix Protein (M1 and M2), Non-Structural Protein 1 (NS1), Neuraminidase and Nucleoprotein (NP).