Iron deficiency is one of the most common nutrient deficiencies globally. Approximately 2 billion (~30%) individuals are anemic worldwide (10). The most common etiology of anemia is iron deficiency (ID). Interestingly, concerns surrounding iron status for astronauts in space exist on the other end of the spectrum. Evidence suggests that ferritin (storage form of iron) and iron availability increase during space flight (7). Weightlessness in microgravity reduces the gravitational burden normally imparted on blood circulation. Consequently, delivery of oxygen to tissue occurs with greater ease (7). Physiological adaptations in space include the reduction of red blood cell mass via neocytolysis (hemolysis of immature erythrocytes) resulting in the release of iron to be stored in the tissues and/or used in biological processes (7,11). Despite these findings, dietary iron consumption remains high during space flight (7). 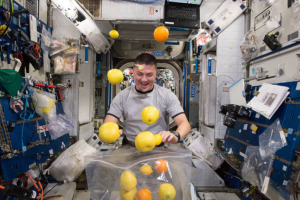 Food staples in America, like fortified cereals and enriched bread, contain iron to attenuate the risk of ID and ID anemia. While beneficial to the general public, consumption of commercially produced iron rich foods during spaceflight can lead to a concerningly high intake of iron. The review by Smith (2002) reported that food systems in space can provide around 20 – 22 mg of iron per day. In contrast, recommended iron intake during space flight is 8 mg of iron per day for both men and women (11).

Elevated iron levels warrant concern since they can lead to oxidative tissue damage through participation in redox reactions (4). A recent study on long duration spaceflight reported the impact of iron status on oxidative stress and bone mineral density (BMD) and found increased ferritin and iron levels during early space flight (13). Furthermore, the same study found that changes in ferritin may have an association with oxidative stress as well as reduced BMD in astronauts. Acute physical manifestations from iron excess certainly requires further exploration, but we should also explore the potential cognitive effects of iron excess.

The association between iron deficiency and cognition has been extensively studied (3,5). Evidence also points to concentrative changes of brain iron with iron excess (6). Emerging pathologies of interest include Alzheimer’s Disease (AD) and Parkinson’s Disease (PD) (9). In neurodegenerative diseases such as AD, iron is found to accumulate in certain areas of the brain (2). An understanding of mechanisms of action for iron transport in the brain continues to be studied. Studies that include assessments of iron toxicity and cognition should extend to include outcomes in astronauts after short and long-duration space.

This blog post was submitted by Amrita Arcot as part of our Summer 2020 blog contest. You can vote for your favorite on our Twitter, Facebook and LinkedIn. The winner will be announced on September 14, 2020.