Reproduction of the malaria parasite has a sophisticated strategy

The parasite that causes malaria, Plasmodium sp., can reproduce both sexually and asexually. A new study in PLOS Pathogens found that the parasite ‘plans’ their offspring based on their surrounding conditions. When in a host, the parasite reproduces asexually in the blood, which results in disease to the host. In order to spread the infection to other hosts, the parasite must produce a sexual form. This version of the parasite then reproduces and infects new hosts, spreading the disease.

The vectors of the disease are species of Anopheles mosquito. Malaria is spread to humans by a bite from a mosquito infected with one of several Plasmodium sp, Plasmodium falciparum being the deadliest. According to the World Health Organization (WHO), in 2017, there were approximately 219 million malaria cases, with more than 90% of them in sub-Saharan Africa. Nearly 435,000 people died from malaria in 2015. Fever, headache and chills are early symptoms, which if not treated rapidly can lead to more serious disease and death. 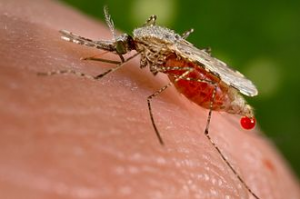 The study details how the parasites reproduce and spread to new hosts when conditions are good. When conditions are not optimal, the parasites remain in the host and focus on asexual reproduction and survival. The researchers, from the University of Edinburgh and University of Toronto, used anti-malaria drugs to alter conditions in which the Plasmodium resided. With heavy doses of anti-malarial drugs, resulting in a very low level of surviving parasites in the blood, they undergo a final effort of sexual reproduction to infect new hosts.

According to lead author of the study, Dr. Petra Schneider, “Being able to predict how parasites balance reproduction and survival could improve the outcomes of treatment.” In 2017, nearly $3.1 billion was spent on malaria prevention and treatment. The ability to improve treatment outcomes could potentially decrease the public health and financial burden of malaria.

Does your laboratory conduct malaria research? In the Kerafast catalog, you can find antibodies to antigens of the Anopheles mosquito and other useful infectious disease reagents.