New findings on limb growth in the fruit fly

Research from IRB Barcelona has revealed new information about the role of the Dpp gene (BMP in humans) in the wing development of the fruit fly Drosophila melanogaster. The study, published this July in the journal eLife, found that Dpp is necessary for tissue growth but its gradient does not regulate wing growth. These findings help drive understanding of limb development, knowledge that can be applied to studying vertebrate development and congenital defects in humans. 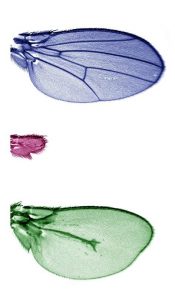 The top and bottom of the image show how the Dpp concentration gradient affects the organization of the wing structure of Drosophila melanogaster. In the center, in the absence of Dpp, the wing does not grow. Photo credit: Lara Barrio.

In the current study, researchers explored how Dpp regulates wing growth, manipulating the amount of Dpp present and examining how the cells behaved as a result. They found that although Dpp is necessary for growth, its concentration gradient does not directly affect the amount of growth. Next up, the team is trying to identify the factors that regulate the final size of the Drosophila wing.

“There must be another alternative and as yet unknown mechanism, and the fly wing is an ideal model to answer this question,” lead author Dr. Marco Milán said in a press release.

The research is consistent with findings about vertebrate limb growth. Scientists know the morphogen Sonic hedgehog influences tissue identify – it causes a hand’s fingers to differ from each other – but does not govern growth.

Do you work in this area of research? Check out our available reagents for developmental biology research, including: