Viruses are continually finding ways to infect their hosts and evade their defenses. Through the evolution of the human race, we have been continually fighting viruses. A recent study published in the journal Nature Communications demonstrates that, in fact, this fight may have been going on much longer than originally thought. 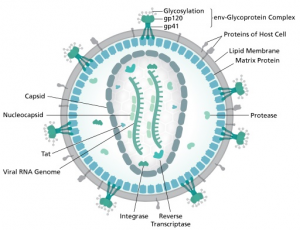 The retrovirus family of viruses was thought to be about one hundred million  years old, until Drs. Aris Katzourakis and Pakorn Aiewsakun, researchers at University of Oxford, created a new mathematical model of retroviral evolution that suggests they may be nearly half a billion years old. Retroviruses, a family of RNA-based viruses, have proven deadly – in the case of HIV for example – to humans, mammals and other species. Retroviruses use the reverse-transcriptase protein to convert RNA into DNA, which is then inserted into the host’s genome. Because of this insertion, the retroviral sequences passed down through the host’s germ line lineage can be used as a molecular fossil of sorts.

This study focused on a group of retroviruses known as foamy viruses, based on their foam-like appearance in culture. Although isolated from humans, other primates and laboratory-infected animals, foamy viruses are thought to be non-pathogenic. Since the origin of placental mammals (~100 million years ago), retroviruses are thought to have stable co-speciation with their hosts. Thus, previous research by Katzourakis and colleagues suggested that retroviruses were approximately 100 million years old, which is considered “fairly young” in the evolutionary timeline.

In this study, a new mathematical model for phylogenetic analysis was developed to account for the “time-dependent” rates of viral evolution, which takes into account the decay over time observed with retroviral evolution. During the analyses, the researchers identified fish and amphibian fossils with foamy virus DNA elements. Importantly, this conclusion suggests that retroviruses moved from ocean to dry land along with their hosts – meaning that retroviruses may be as old as their vertebrate hosts, significantly pre-dating the emergence of man and making retroviruses the oldest viruses to date. Based on this new model, retroviruses are estimated to have evolved between 460 and 550 million years ago, during the Ordovician period of the early Paleozoic Era.

Evolution at a glance

This research suggests that retroviruses are as old or older than their vertebrate hosts and should lead to more studies on the evolution of human immunity. According to Dr. Katzourakis, his retroviral finding “gives us the context in which we should consider their present-day activity and interactions with their hosts.” Further study of the evolution of viral-host immunity may help us identify new ways to combat dangerous and deadly viruses in the future.

Do you study viruses? Check out our selection of unique reagents for virology research, including: