At the Rockefeller University, a team of researchers studying stem cell differentiation in early embryos have identified a new mechanism of cell communication involved in the process. The results, published in Cell, may have implications for skin cancer treatments.

Laboratories across the globe are studying adult stem cells, undifferentiated cells which are dispersed among the differentiated cells in a tissue or organ. The adult stem cells possess the ability to differentiate to some or all of the specialized cell types of that tissue or organ. “While adult stem cells are increasingly well-characterized, we know little about their origins. Here, we show that in the skin, stem cell progenitors of the hair follicle are specified as soon as the cells within the single-layered embryonic epidermis begin to divide downward to form an embryonic hair bud,” explains Elaine Fuchs, head of the Robin Chemers Neustein Laboratory of Mammalian Cell Biology and Development. “This timing was much earlier than previously thought, and gives us new insights into the establishment of these very special cells.”

The genesis of adult stem cells

Cell groups found among adult stem cells are referred to as a “niche”. The niche serves an instructional purpose to direct the localized stem cells to either remain as an adult stem cell or to begin the process of differentiation to a specified cell type for that particular tissue. 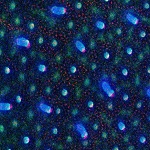 “Adult stem cells are dependent on the niche for instructions on both how to become a stem cell, and how to control stem cell population size,” says first author Tamara Ouspenskaia. “The question was, does the niche appear first and call other cells over to become stem cells? Or is it the other way around? Stem cells could be appearing elsewhere first and then recruiting the niche.”

The researchers at Rockefeller set out to answer that question using the mouse hair follicle as a model. An initial hair follicle bud has the ability to differentiate into a variety of cell types that become various layers of tissues in the mature hair follicle. Fuchs and colleagues studied the very early division of the cells in the follicle using an immunofluorescent labeling technique to visualize the cells and their progeny following cell division. Interestingly, they found that during cell division of these early progenitor cells, one daughter cell remained, while the second daughter migrated to a different tissue layer and becomes a stem cell for that specified tissue. These data demonstrate that stem cells exist in this tissue before the surrounding niche.

Cell differentiation and specification is a highly complex process of gene regulation. Signals between and among cells help to determine cell fate and a myriad of molecular signals and pathways are known. The Rockefeller researchers found that the signaling environment of these two daughter progeny ended up being very different. Specifically, they found that levels of the WNT signal (the WNT family of signals is so named as they include the mouse proto-oncogene integration 1 -int1, and Dropsophila Wingless -Wg) affected the cells’ ability to respond to SHH (sonic hedgehog), another signaling molecule involved in early embryonic development. The migrating daughter cell was now in a low WNT region of the follicle and this cell responded to SHH, while the sister cell that did not migrate was in a high WNT environment and did not respond to SHH signaling.

“These cells must leave home, they must leave the environment with high WNT signaling, to become stem cells,” says Ouspenskaia. “We observed that SHH, which actually comes from the cells with high WNT signaling, is essential in helping the cells leave. So in order for this escapee cell to become a stem cell, it needs to receive an SHH signal from its sister cell at home telling it ‘you’re the stem cell.'”

WNT and SHH have been identified as playing a role in skin tumorigenesis over 15 years ago, as described in Nature. Based on her team’s recent finding, Dr. Fuchs says, “This newly identified signaling crosstalk provides insights into why these two signals have such a profound impact on skin cancers, where the numbers of cancerous tissue-propagating stem cells are excessive.” These studies will surely lead to more research on skin cancer and hopefully new developments and treatments in the future.

Do you work in this area of research? Check out our related bioreagents, including: