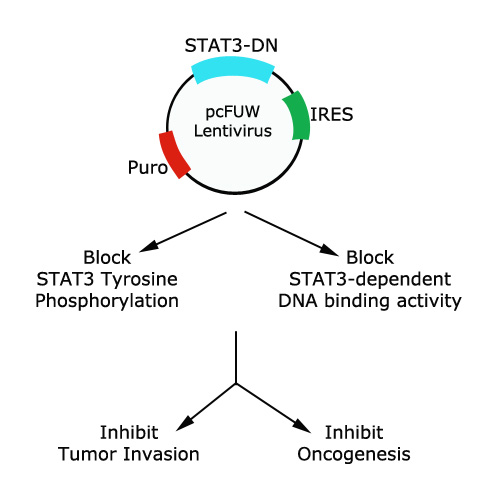 As we spoke to researchers at the American Association for Cancer Research (AACR) about our featured oncology research products, we quickly realized that the STAT3-dominant negative (Y705F) Lentivirus we offer through the University of Tennessee is quite the hot reagent. I heard from individuals who weren’t aware this vector for STAT3 regulation existed, so they were excited to learn more about it. We also came across a researcher who actually used this particular STAT3-dominant negative lentivirus and mentioned that it successfully helped him to finish one of his post-doctorate projects. It was evident by speaking to active cancer researchers at AACR that STAT3 is still a highly valuable player in tumorigenesis and that much research is necessary to fully understand STAT3 regulation and STAT3 inactivation for cancer therapeutic applications.

Signal transducers and activators of transcription (STAT) proteins function as signaling proteins in the cytoplasm and as transcription regulators within the nucleus. Seven distinct STATs have been identified, showing critical roles in various basic biological processes. As one can imagine, loss of STAT regulation could be detrimental for an organism. A Science article published just last week details how STAT3 specifically controls human dendritic cell differentiation, showing STAT activity being essential for cell differentiation and immune function. STAT3 knockout leads to early embryonic lethality, so its importance in embryonic development is indispensable. STAT3 constitutive activation is found in many types of tumors, therefore STAT3 regulation is not only essential for normal cellular functions, but also for the prevention of tumorigenesis. The potential for a cancerous outcome is one of the main reasons why much research has gone into studying mechanisms of STAT3 activation and regulation.

A PNAS article published just last month gave us all insight into a possible mechanism on how STAT3 constitutive activation promotes tumorigenesis. This group infected cells with Epstein – Barr virus (EBV), as EBV infection has previously been shown to activate and induce STAT3 expression. EBV induces oncogene-mediated cell proliferation and promotes replication stress-associated DNA damage. However, the DNA-damage response (DDR) system is compromised because, as this group of researchers discovered, STAT3 upregulation by EBV impairs signaling downstream of ATR and interferes with the S phase checkpoint. These researchers had shown the debilitating effect STAT3 activity can have over the DDR system, leading to a cancerous phenotype.

Another recent report shows how STAT3 inactivation, by the red wine ingredient resveratrol, could be beneficial in controlling cancer. Published in PLoS One this past February, researchers reported that when human transitional cell carcinoma cells, known to contribute to the most common form of bladder cancer, were exposed to the red wine compound resveratrol, cell growth suppression and apoptosis was observed. The reason for growth inhibition and an increase in apoptosis was due to STAT3 inactivation. The experiments were shown in an orthotopic mouse model, where tumor cells were implanted into the suburothelial layer that was subsequently targeted with resveratrol. Resveratrol treatment attenuates STAT3 phosphorylation, inhibits STAT3 nuclear translocation and transcription, and in effect causes the downregulation of STAT3 downstream genes (e.g. c-Myc, VEGF, and cyclin D1). Because STAT3 upregulation is linked to tumorigenesis, red wine consumption would be an interesting alternative treatment to control STAT3 activity and STAT3-dependent disease.

Dr. Lawrence Pfeffer understood the impact of STAT3 activation on tumorigenesis and realized the difficulty entailed in inactivating or deleting STAT3 for cell culture or mouse experiments. Dr. Pfeffer constructed a lentivirus that stably expresses a mutated form of STAT3 at tyrosine 705. Phosphorylation of this particular tyrosine is crucial for STAT3 activation and its DNA binding activity. The mutated STAT3 swaps tyrosine 705 for phenylalanine, preventing phosphorylation at this site. This substitution empowers STAT3 into behaving in a dominant negative manner, leading to suppression of STAT3 activity and subsequently inhibiting tumor initiation and progression. With this STAT3-dominant negative (Y705F) lentivirus, Dr. Pfeffer was able to show inhibition of cancer invasiveness and melanogenesis. Cancer researchers at AACR identified the value of this STAT3 lentivirus as well and have shown to our company the importance of sharing reagents and making them public to the research community. Thank you to Dr. Pfeffer for his vector and we hope to provide this lentivirus to researchers studying STAT3 regulation.

For information about the STAT3-dominant negative (Y705F) Lentivirus coming directly from Dr. Pfeffer’s laboratory at the University of Tennessee, please click on the link below: